Build a battery from Pennies and light some LEDs 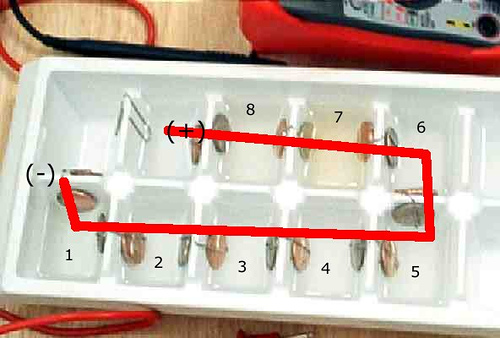 In order to turn pennies into batteries, another electrode and an electrolyte are needed. In this case, dimes (zinc) are used as the positive electrodes and salt water is used an electrolyte.
Finding ample power for an LED
Unfortunately, this battery is not enough to light an LED. In order to string eight of these cells in series, an ice cube tray is used. Metal paperclips hang the pennies and dimes into the electrolyte banks. Because the paperclips are conductive, the eight cells are automatically connected in series forming a more powerful battery. This provides a differential of about two volts.

As you may notice, 0.5 volts * 8 != 2 volts. Not all of the banks produced a reliable voltage. In fact, one bank seemed to be working against me.

Connecting the short end of the LED to the penny and the long end to the dime lights up the LED! Everything works as planned. The penny batteries provide about 110 micro-amps of current in series. At two volts, this is only about 220 micro-watts of power!

It does in fact ?cost? pennies to power an LED.