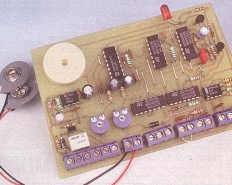 This alarm system was originally designed to protect the contents of a garden shed, although it would also be ideal for other outside buildings. In addition it would offer a good basic security system for small residential areas, such as flats and bedsits. It may be installed without drilling or attaching to the building, which could be an advantage in rented accommodation.
The unit features two separate protection arrangements. The entry/exit is protected using standard normally-open and/or normally-closed sensors such as magnetic switches and pressure mats. Entry and exit delays are independently adjustable, from 5 to 30 seconds, during which time a warning sounder operates and a status LED flashes.

Valuable items are protected by a wire loop system similar to that used in shops etc. This uses a two core cable which is threaded through the items to be protected, and the alarm will be triggered immediately if either core becomes open-circuit or if the two cores are shorted together. Suggestions are given later for making the system even more tamper-resistant.


The loop system can be used independently from the entry/exit system. This would be useful if a shed or garage needs to be left open when working in the garden, while still providing protection for valuable bicycles and power tools.

The unit is battery powered, and will give at least six months continuous operation from a PP9 battery. The alarm sounding period is limited to about sixteen minutes, to conserve battery life and reduce annoyance, but the status LED remains on after this period to indicate that the alarm has been triggered. An optional relay output can be connected to an extra sounder or household alarm system.