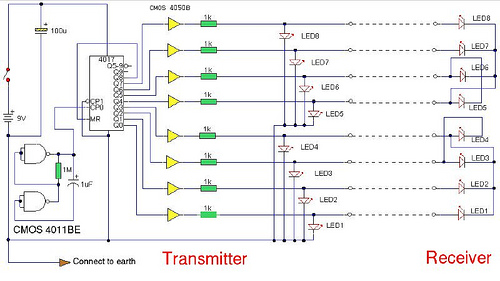 A multi wire cable tester with a separate LED for each wire. Will show open circuits, short circuits, reversals, earth faults, continuity and all with four IC. Designed initially for my intercom, but can be used with alarm wiring, CAT 5 cables and more.
Circuit Notes:

Please note that for clarity this circuit has been drawn without showing power supplies to the CMOS 4011 and CMOS 4050 IC’s. The positive battery terminal connects to Pin 14 of each IC and negative to Pin 7. The CMOS 4017 uses Pin 16 and Pin 8 respectively. Note also that as the CMOS 4050 is only a hex buffer, you need 8 gates so two 4050’s are required, the unused inputs are connected to ground (battery negative terminal).

The circuit comprises transmitter and receiver, the cable under test linking the two. The transmitter is nothing more than a “LED chaser” the 4011 IC is wired as astable and clocks a 4017 decade counter divider. The 4017 is arranged so that on the 9th pulse, the count is reset. Each LED will light sequentially from LED 1 to LED 8 then back to LED 1 etc. As the 4017 has limited driving capabilities, then each output is buffered by a 4050. This provides sufficient current boost for long cables and the transmitter and receiver LED’s. The receiver is simply 8 LED’s with a common wire…read on.

With a good cable and all wires connected then LED 1 will light at both cable ends, followed in sequence by LED 2 ,3, 4 etc to LED 8, the sequence then repeating. If a 4 wire cable is used, it must be connected to use the common return wire as described in the preceeding paragraph. The sequence would be LED 1,2,3,4 repeating with a delay as the 4 unused outputs are stepped through.

To check for earth contact faults, the probe labeled “to earth connection” would be physically connected to a local earth. A wire that is earthing will dim or extinguish the LED’s at both ends of the cable. An LED not lighting at the receiver, indicates a broken or open circuit. If two wires are short circuit, example 3 and 4 then at the receiver the sequence would be 1, 2, 34, 43, 5, 6, 7, 8. A reversal would be indicated by an out of pattern sequence of LED’s. Here’s an example, the probe is connected to an earth at the transmitter, the cable is very faulty, wire 1 is OK, 2 is earthing, 3 and 5 are reversed 4 is OK, 6 is open circuit and 7 and 8 are short circuit. See below.