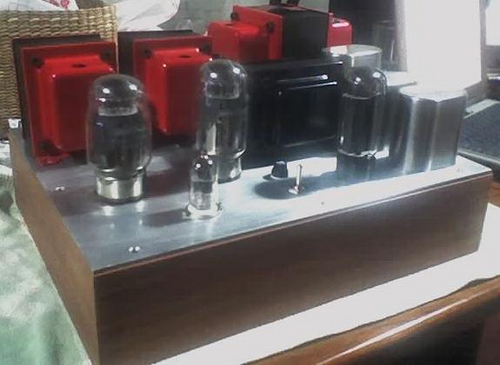 Alex has pulled together a simple single ended tube amp that is based around the popular KT88 valve. As an alternative, EL34 tubes can be used in place of the KT88 tubes.
The design has been based largely around Mikael Abdellah’s KT88 SE Tube Amplifier design from 2003. The amplifier section is generally the same as Mikael’s, but Alex have added a switch that will allow me to switch between triode or ultralinear operation (the original circuit is only ultra-linear). Also, the power supply to the 6N1P preamplifier section has been beefed up with the addition of a choke. The preamplifier tube is a 6N1P, but the 6DJ8 / ECC88 / E88CC family of tubes can also be used. The power supply is based around a 5U4-GB dual tube rectifier