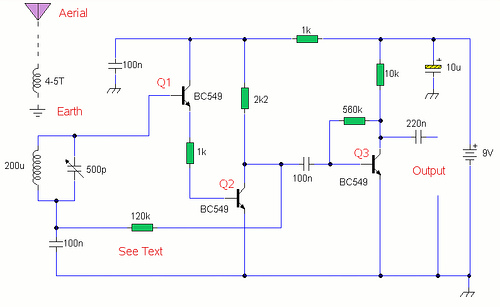 There are two parts comprising this transmitter, the RF oscillator and the audio amplifier. The oscillator is the heart of the transmitter which is built around Q1. The circuit may be tuned to around 500 KHz to 1600 KHz using the tank circuit’s combination of inductor L1 and variable capacitor VC1. The pieces of this circuit may be obtained from old MW radios. To produce oscillation, Q1 requires the regenerative feedback from the amplifier to make the feedback signal in phase with the input signal. This is attained by attaching the opposite ends of the tank circuit to the base and collector of Q1. The oscillation frequency is controlled by the variable capacitor while resistor R2 ensures that the oscillation and modulation signal will not be shunted to the ground, by increasing the input impedance, through the very low internal resistance of Q1. To make sure that the oscillation is passed from collector, to the emitter, and through the internal base emitter resistance of the transmitter by the capacitor C2, the signals are coupled or joined by capacitor C7 from the base to the top of inductor L1

The audio amplifier consists of Q2 conducting at common emitter. The full gain of the amplifying stage is attained by the emitter resistor being decoupled by capacitor C5. To increase the transmitting range of the circuit, an antenna may be utilized or just a 30cm of wire at the collector while using the 4.7K ohm preset resistor will increase the quantity of AM modulation. Lastly, an electret condenser microphone (ECM) is used because it is more sensitive and responsive and well suited for any grade of sound.