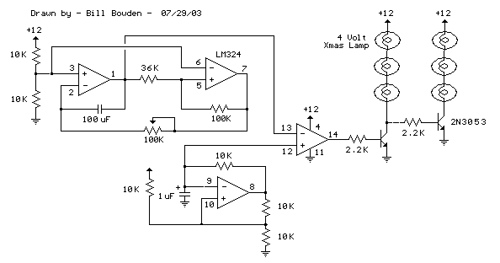 This circuit is used to fade a pair of red LEDs. In this version, the lamps are faded by varying the duty cycle so that higher power incandescent lamps can be used without much power loss.
The switching waveform is generated by comparing two linear ramps of different frequencies. The higher frequency ramp waveform (about 75 Hz.) is produced from one section of the LM324 quad op-amp wired as a Schmitt trigger oscillator. The lower frequency ramp controls the fading rate and is generated from the upper two op-amps similar to the “fading eyes” circuit. The two ramp waveforms at pins 9 and 1 are compared by the 4th op-amp which generates a varying duty cycle rectangular waveform to drive the output transistor. A second transistor is used to invert the waveform so that one group of lamps will fade as the other group brightens. The 2N3053 will handle up to 500 milliamps so you could connect 12 strings of 4 LEDs each (48 LEDs) with a 220 ohm resistor in series with each group of 4 LEDs. This would total about 250 milliamps. Or you can use three 4 volt, 200 mA Xmas tree bulbs in series. For higher power 12 volt automobile lamps, the transistor will need to be replaced with a MOSFET that can handle several amps of current. See the drawing below the schematic for possible hookups.