An AC Dimmer for Use with the Stamp 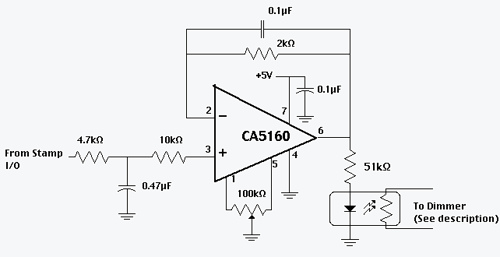 The basic idea of the circuit is to replace the variable resistor that is connected to the knob of a dimmer with an optoisolater. The optoisolator is connected to an operational amplifier that interfaces with the stamp.
Users of this circuit should read and be familiar with the operation of the stamps PWM function. This document assumes that you have read and understood the PWM section of the stamp manual. It is also asumed that you have some experience wiring AC. As it is likey you do not have experience with AC, pleae find someone who has. AC is dangerous and it can kill you.

Carefully remove back plastic cover from the dimmer. There should be two rivets holding it on. I recommend using a drill to remove the head of the rivet.


On the back of the plate you will find a cylider about an inch in diameter and half an inch tall. Around the edge of the cylider are a bunch of components. On the flat side of the cylider there are two leads, These leads are for the on-off switch of the dimmer. On one side of the rounded part of the cylider there are three solder lugs, two of which are connect to wires or other components. Remove the components from the center one, this should just be just one resistor. Place the end of the optoisolator labeled ‘cell’ between the center lug and the resistor you just removed.