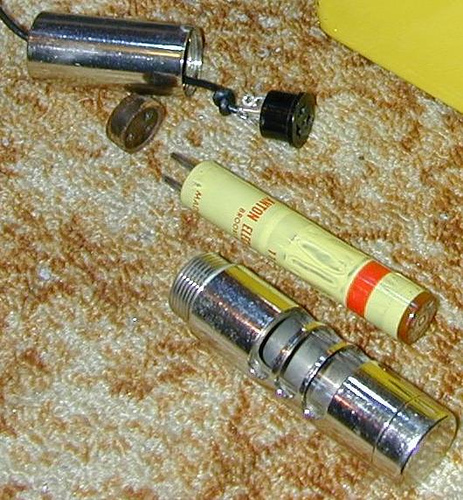 The probe from my CDV700 geiger counter had a worn out probe wire, moving it would cause false clicks from the counter, or no readings at all. The remedy was to rebuild the probe assembly as follows:

Unscrew the top of the probe from the bottom by twising counter-clockwise until the two parts come apart. Don’t be confused by the alpha shield in the middle of the probe, it turns freely. The geiger tube should be connected to the bottom of the probe assembly at this point.

Gently rock and pull the 6993 geiger tube from its base until it comes out of the socket. This may take a while, be careful since the tube is fragile, it is also the most important component in the whole unit.


There is a brown rubber plug between the geiger tube and the 3-pin black amphenol socket. Push a small flat screwdriver around the edge of the rubber plug to loosen it from the sides of the probe, then use a needle nose pliers to gently pull the plug from inside of the probe.

The original wire is tied in a knot at the bottom of the probe and glued in with hard gray potting compound. Clip the wire off at the base of the probe.

The black 3-pin Amphenol tube socket is soldered to the glued-in wire. It can be removed by gently twisting to the left and right until the original wires break off. Do this by putting small needle nose pliers into 2 of the socket holes. Don’t get too agressive, the socket is brittle and can easily break. The socket pins can also break. In the worst case scenario, if the socket breaks, it should be possible to solder the wires to the geiger tube pins, or to what’s left of the socket pins. Be sure to observe which wire goes to which pin. If you lose track of which wire connects to which pin, some live experimentation can be used to figure out which connections make the counter work. Beware of the 900 Volts across the wires when the counter is on.