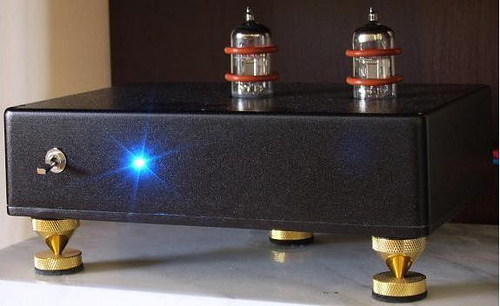 This is a simple and inexpensive tube preamplifier kit featured in Silicon Chip Magazine build by Mark Houston.The preamplifier kit is based around the common 12AX7 dual triode. What makes this kit relatively inexpensive is that power comes from a switch mode power supply which is fed using a 17 volt DC wall wart.
Mark’s modifications to the preamplifier kit include snubbers and upgraded capacitors. The end result is a simple DIY tube preamplifier that sounds great and will keep some money in your pocket for the next project.
12AX7 Preamp Kit Assembly
Prior to building the preamplifier kits, Mark purchased some nice Sprague capacitors in order to upgrade the signal path capacitors.Once he had put together the boards, he proceeded to add snubbers to the preamp and power supply sections.
Enclosure Construction
Pure silver wire was used from the RCA jacks and potentiometer into the preamp. The black material vinyl dampening material glued in and under the case to get it as quiet as possible. He also added a ferrite choke around the power supply leads to the preamp section. Sound – 12AX7 Tube Preamp Kit
Prior to building the enclosure, he tried the preamp with the NAD C542 and the LM3875 monoblocks. It was evident on the first listening that this was exactly what was required to restore the full passion of the performance. This made for a very nice combination, beautiful valve tones, a more convincing performance and the power, speed and clarity of the LM3875 chip amps.