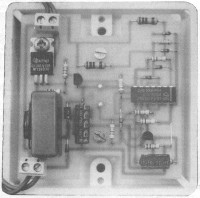 Llight operated switches are not new ideas, but neither are they the easiest items to purchase ready-made. Originally, this unit was built to switch on the author’s outside Christmas lights when it became dark. No doubt readers will have other uses in mind. One such might be as a security porch light controller.
Circuit Operation

The low voltage power supply is derived from the mains without isolation. The AC input is clamped to -15V and +0.6V relative to neutral by D1, a 15V zener diode. The remaining voltage is dropped by C1. A capacitor is used because it dissipates virtually no power (unlike a resistor) due to the 90 degree phase shiftbetween voltage and current. The -15V pulses are rectified by D2 and smoothed by C2 to give a steady -15V supply rail.

C1 must be a Class X component rated for continuous connection directly across the mains. These devices are normally sold as suppression components. A normal high voltage capacitor is NOT suitable and MUST NOT BE USED.

R1 is a surge limiting component. This reduces the in-rush current if the unit is powered up when the mains cycle is near a peak. Use a small wirewound resistor, because these have better surge handling than carbon or metal film.


IC1a, IC1b and associated components produce the zero-crossing pulses. Refer to the timing diagram shown in figure *. The inputs of IC1a are normally held low by R3, and the output will be high. When the mains cycle (waveform 1) rises above about 40V, the voltage on the input will be sufficient for the gate to switch and the output of will go low. When the voltage falls below 40V at the end of the positive half cycle, the output of IC1a will go high again (waveform 2). Diodes D3 and D4 clamp the waveform to the supply rail extremes, protecting IC1 from excessive input voltages.

The input on pin 6 of IC1b is connected similarly, but is normally held high by R5. This gate therefore operates on the negative half cycles. The differing values of R3 and R5 are due to the fact that one gate is biased to neutral and the other is biased to 15V below neutral. The other input of IC1b is connected to the output of IC1a, so that this gate sums the two half cycles, giving the zero crossing waveform shown (waveform 3). This is inverted by TR1, giving a signal which pulses high around the zero crossing points.

IC1 has Schmitt trigger inputs. This ensures reliable switching at about the mid-position between the supply rails (50%), with a varying voltage input. The Schmitt effect also gives a degree of hysteresis. Normal logic gates (such as the 4011) regard anything between 30% and 70% levels as indeterminate, and give an unpredictable output.

IC1c and IC1d form a two input AND gate. One input (pin 9) is driven by the previously mentioned zero-crossing pulses. The output (pin 11) will follow this only if the level on the other input (pin 8) is above 50% of the supply voltage. The voltage here is determined by the light level reaching LR1 (ORP12).