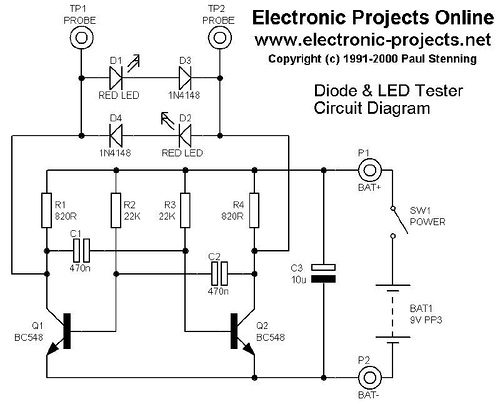 The polarity markings on LEDs (Light Emitting Diodes) seem to be a common cause of confusion. The polarity may be indicated by a flat section on one side of the body or by one lead being shorter than the other, but different manufacturers are not consistent as to which lead they are marking.
Parts List

As Req’d Flex (for test leads)

The simple Diode and LED Tester presented here costs under £5 to build (including all components, the battery and a cheap case) and will indicate the polarity of almost all types of LED and other diodes with no risk of damage. The average test current is about 5mA (10mA pulses), which is sufficient to illuminate the LED being tested.

The unit has two test probes and two indicator LEDs. The diode or LED to be tested is simply connected either way round between the test probes, and the cathode connection is indicated by the LED closest to that connection illuminating. My original prototype has been used regularly for several years, and has saved me a lot of time and irritation.

The unit can be used to test all conventional LEDs including the multi-colour types and IR devices. The only types of LED that cannot be tested are those containing additional circuitry, such as the flashing and constant-current types.


It can also be used to check most silicon and germanium diodes and rectifiers providing they can withstand a test current of 10mA. Zener diodes can be tested for forward drop but not for zener effect, although this is sufficient to prove if they are alive or dead. The unit can also be used for basic diode tests on bipolar transistors, although the test current may be too high for the base connection of some devices.

The circuit was designed to be simple and low cost. A simple transistor circuit was used because the components (or suitable alternatives) are more likely to be in the constructors “junk box”. A brief discussion of the IC based alternatives that could have been used is given later.

The circuit consists of a standard two transistor astable multivibrator arrangement, the operation of which will be described shortly. The outputs on the collectors of the two transistors are a square wave signal of about 200Hz. The two outputs are out of phase with each other – when one output is high the other is low and vice-versa.

Between these two outputs are connected two LEDs (D1 and D2), back-to-back, with series diodes (D3 and D4) to increase the forward voltage drop. When Q1 is on and Q2 is off, current flows through D2, causing it to illuminate – the current being limited to about 10mA by R4. When Q1 is off and Q2 is on, D1 illuminates. Although the LEDs are flashing, the 200Hz rate is sufficiently fast that they both appear to be continuously illuminated. Since the test current is 10mA for 50% of the time, the average is 5mA.