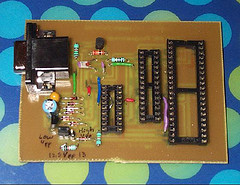 Schematic and layout for an updated JDM2 PIC Programmer. Includes clock and data filter, Vpp voltage divider for modern PIC microcontrollers (eg USB PIC 18F2455/4455).
There was a note on the Microchip forum (by Olin Lathrop) about programming the dsPIC30F201, suggesting to put 22..47 pF on the PGD and PGC lines to ground near the target chip. In addition, put a 100 ohm resistor in series with the PGD line between target chip and the cap. The resistor and cap on the PGD line low pass filter the PGD signal when it is driven by the target chip. This reduces the high frequencies that can couple onto the PGC line. The cap on the PGC line makes it less suceptible to coupled noise.

We later found out that this important note also applies to the PIC18Fxxxx family. A user of a Velleman PIC programmer reported success with a PIC18F4520 after adding 2 * 33 pF caps and a 100 Ohm series resistor.

This note applies primarily to programming PICs through a cable while they are soldered into a circuit. When using this type of programming the extra capacitors and resistor must be near the target chip – it does not help to have them on the programmer:

Article by ian at http://www.instructables.com/