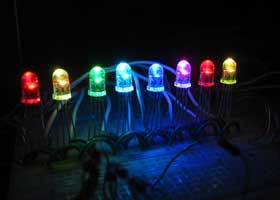 This code is for a simple RGB LED controller for 8 LEDs using a PIC16F628 that has PWM control for the LEDs.
It is controlled by sending 12 bytes to the PIC?s internal USART for the intensities of the red, green, and blue color channels. The operation is very simple and so is the wiring. The PIC selects each LED and turns on the respective colors if they are less than or equal to theCount then goes to the next LED. Because of persistence of vision, the eye sees the LEDs as all being on at the same time. However, because this is running off the internal OSC (4MHz) and the code is not optimized, there is some flickering evident when moving one?s head from side to side.