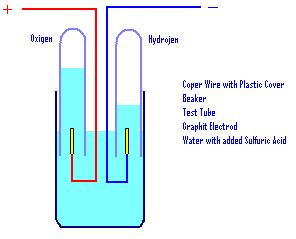 How can you perform Electrolysis of water to produce Hydrogen and Oxygen?
Research the Problem:

Electrolisis is Chemical change, especially decomposition, produced in an electrolyte by an electric current. Electrolytes dissolve by dissociation. That is when the molecules of the substance break down into charged particles called ions. An ion with a negative charge is called an anion because it is drawn through the solution to the positive charge on the anode. A particle with a positive charge is called a cation. It moves through the solution to the cathode. Water has its solvent properties because it is polar. The molecule has charged ends (+ and -). These charged ends react with charges on other polar substances to dissolve them. They do so by taking hydrogen atoms from the substance to form hydronium ions. The word electrolysis means the process of breaking molecules to smaller components by using an electric current. Positive and negative poles of a DC electric source such as a battery can absorb opposite ions of an electrolyte causing separation of ions and creation of a new substance.

Hypothesis: Adding some Sulfuric Acid as electrolyte will increase conductivity of water and creation of Hydrogen and Oxigen gases.


In this experiment, initially we used two copper wires, one twelve-volt battery, and some drinking water to do the tests. The process was slow and caused excessive amounts of corrosion on the copper wires and discoloration in the water. To avoid corrosion of electrodes and discoloration of water, we repeated the test using Graphit Rods as electrodes. Also to speed up the process we added some Sulfuric Acid to the water as electrolyte.

Fillup ¼ of beaker with clear watter, secure two test tubes filled with water in the beaker in a way that test tubes are up-side down over the beaker. Mount the wires or electrodes that you have prepared and then connect the electricity.

Check the produced hydrogen and oxygen gasses in five minutes. Repeat the test with different electrodes and different amounts of electrolytes and record the results in the table below. You may want to repeat the experiment with different electrods. (Electrod is only the area that has contact with water, not the part that has insulator or plastic cover. In the above picture electrodes are identified with yellow color).