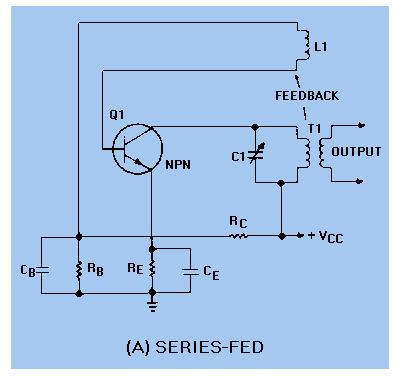 Oscillators may be classified by name, such as Armstrong, Hartley, Colpitts, or by the manner in which dc power is applied. An oscillator in which dc power is supplied to the transistor through the tank circuit, or a portion of the tank circuit, is said to be SERIES FED.
An oscillator which receives its dc power for the transistor through a path separate and parallel to the tank circuit is said to be PARALLEL FED OR SHUNT FED. All the oscillators in this chapter can be constructed either way, series or shunt fed. The construction depends on the characteristics of the oscillator circuit the designer is interested in.

A SERIES-FED, TUNED-COLLECTOR ARMSTRONG OSCILLATOR is illustrated in figure 2-9 , view (A). The dc path is from the negative side (ground) of VCC through RE, Q1, T1, and back to the positive side of VCC. The figure clearly illustrates that both the ac and dc components flow through the tank circuit.

Frequency INSTABILITY (variations above and below the desired output frequency) may be caused by transistor characteristics or by variations in the external circuit elements.

The use of a common bias source for both collector and emitter electrodes results in a relatively constant ratio of the two voltages. In effect, a change in one voltage is somewhat counteracted by the change in the other. This counteraction takes place because an increase in collector voltage causes an increase in the oscillating frequency, and an increase in emitter voltage causes a decrease in the oscillating frequency. This is a result of the change in capacitance between the junctions of the transistor. However, a common bias source does not completely compensate since the effects on other circuit parameters of each bias voltage differ.

The ARMSTRONG OSCILLATOR is used to produce a sine-wave output of constant amplitude and of fairly constant frequency within the rf range. It is generally used as a local oscillator in receivers, as a source in signal generators, and as a radio-frequency oscillator in the medium- and high-frequency range.

The identifying characteristics of the Armstrong oscillator are that (1) it uses an LC tuned circuit to establish the frequency of oscillation, (2) feedback is accomplished by mutual inductive coupling between the tickler coil and the LC tuned circuit, and (3) it uses a class C amplifier with self-bias. Its frequency is fairly stable, and the output amplitude is relatively constant.

Views (A), (B), and (C) shown in figure 2-10 can be used to build the basic Armstrong oscillator. View (A) shows a conventional amplifier. R2 provides the forward bias for Q1, C2 is a coupling capacitor, and L1 and R1 form the collector load impedance. This is a common-emitter configuration which provides the 180-degree phase shift between the base and collector.