A UHF Discone Antenna for scanners 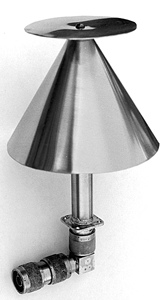 The discone antenna is a vertically polarized antenna, and consists of a flat disc of about 0.17 wavelength diameter at the lowest desired frequency, with the disc plane horizontal, mounted atop but insulated from a cone that has a length of 0.25 wavelength on the side.
A discone for use at 700 to 2000 MHz will be described. It is also very small, but effective. In tests, it outperformed a 24 inch discone at 900 MHz. This is probably because it would have a lower wave angle and that it is small enough to use solid copper elements, with resulting lower losses. Improvement on reception and transmission was about 3 DB. Measured VSWR is better than 1.5 to 1 at 910 and 1289 MHz, and the discone was actually used as a transmit antenna for some experimental amateur TV transmissions at these frequencies.