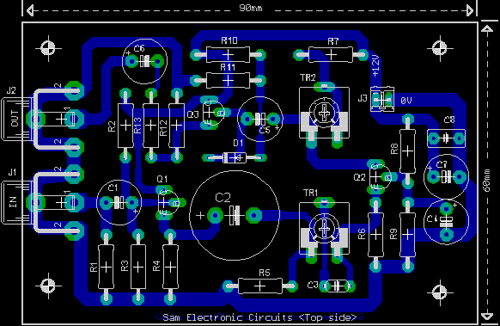 it is based in three transistor. With this circuit we can amplification selectively the high signal of picture frequencies [Video] with result bigger clarity than this.


The circuit should be placed between a? Video unit and the reception Scart or the plug Video input of television receiver. The designing is simple, it?s based in three only transistor. The first stage of Q1 function as isolator – adapter of input impedance. The second stage round the Q2 in common base connection which the gain is determined by the TR2. The TR1, R6 and C3 determine the frequency response. The third stage round the Q3 works as output buffer and 75-ohm line driver. The TR2 should be regulated in a place where the circuit output voltage, to be 1Vp-p, in 75 ohm load. The circuit functions with 12Volts – 50mA well stabilized. [Elektor 7/8 92]