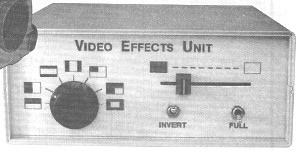 The author enjoys producing his own video compilations of music tracks. This normally involves recording a few hours of music videos from MTV and other music programmes, then copying selected tracks onto another tape.
One problem is the joins between the tracks. Since the inevitable talking over the beginning and end of the track has to be removed, the result is rather untidy joins between tracks. A similar situation occurs when editing camcorder tapes etc.

Digital AV mixers are available commercially, however these normally cost as much as a good video recorder, which is rather expensive for home use. The Video Effects Unit presented here has a more modest specification, with a more modest price tag!

It should be possible to construct this unit for about fifty pounds including the case. Setting up is straightforward, and no test equipment is required. Some of the companies and individuals who produce wedding videos could put this unit to good use!

The unit enables the picture to be wiped to black at the end of a track, and then restored at the beginning of the next track. The recording video recorder would be paused once the picture is black, and the pause released just before fading in the next section.

A “Full” switch is provided to show the picture when the unit is faded – this is useful for finding the beginning of the next section once the recording machine is paused.

The unit offers seven wiping effects, all of which are also available in inverted form giving a total of fourteen, these are illustrated in fig **.

As described this unit does not fade the sound, however it would be a simple matter to add a second slider control next to the existing one, and operate both simultaneously. Further comments on this option are given later.


The unit only allows the wiping of one video input to black. Due to sync problems it is not possible to mix two video signals without incorporating the expensive digital techniques contained in commercial products. Broadcasters and professionals use a gen-lock system where all equipment is controlled by one external sync generator, however domestic video equipment does not support this system. In any case mixing two signals would require three video recorders, which is probably excessive by domestic standards!

The complete circuit diagram is shown in fig ** and fig **. Although this may initially appear complicated, the operation is reasonably straightforward.

On the circuit diagram and in the following description, a “-” after a signal name indicates that the line is active low.

The unit works by selectively blanking the picture. To achieve this, parts of the video signal are replaced with a voltage level corresponding to black. Monostables and control logic are used to select the portions of the signal to blank.