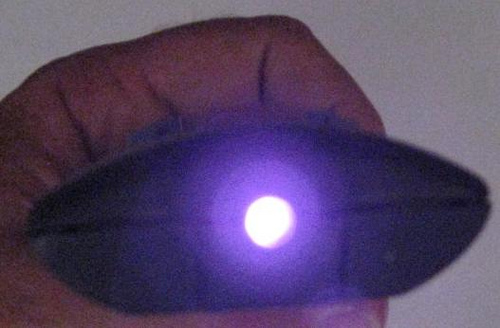 At either end of the rainbow there is light we can not see. Below the red end is near infrared light, shorter in wavelength than the infrared we feel as heat. Above the violet end of the rainbow is near ultraviolet, longer in wavelength than the ultraviolet light that causes sunburn.
Because these invisible lights are so close to the visible light we can see, they act in many ways just like normal light. They can be focused with lenses, and cameras can see them.

Seeing in the infrared

A source of near infrared light is as close as your television remote control.

Look directly into the front of the remote control and push some buttons. You can’t see anything change. But now point the remote at an inexpensive digital camera or video camera and push the buttons. Now, in the camera’s screen, you see a brightly flashing beacon of light. You can use it as a flashlight to read by, as long as you look in the camera screen.

Digital camera sensors can easily see in the infrared. In fact, they are more sensitive to infrared than they are to normal light. Camera manufacturers try to fix this by adding infrared blocking filters in front of the sensor. In cheap cameras, these are not very effective. In more expensive cameras, such as the digital single-lens reflex camera used to take the shot below, the infrared light is much dimmer than in the pocket camera shots above.


Seeing in the ultra-violet

Cheap ultraviolet light sources use a mercury vapor lamp and some dark purple glass that blocks most of the visible light from shining through. Unfortunately, rather a lot of blue and violet light gets through.

A better source is an ultraviolet light emitting diode. While some of the cheap LEDs called “ultraviolet” are actually really just purple LEDs, you can obtain good LEDs whose wavelength is 395 nanometers or below. At the time of this writing, 395 nm LEDs can be had for a few dollars, while a 375 nm LED penlight goes for $25, and a 255 nm LED will set you back $600.00.

It is not advisable to look into an ultraviolet LED, any more than it is to look at the sun. But a quick glance shows that a 395 nm LED looks dimly blue-violet to the human eye. But when we look at it through the camera, we can see that the camera sensor is again rather good at seeing this otherwise mostly invisible light. The light looks blue-white to the camera because the camera and its software interpret ultraviolet as blue, and this light is very bright in the ultraviolet.