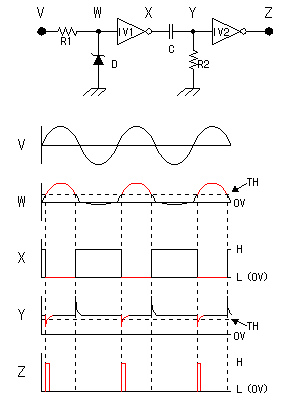 When the W point is higher than TH, H and L of the signal of the X point reverse but don’t influence the circuit operation. In any case, in the Z point, the pulse with the period which is the same as the input signal comes out.

I do the following explanation, when signalless, it assumes that the W point is below TH.

When the input signal is added in this condition, when becoming above the threshold voltage of the inverter, the output becomes the L condition. (The X point)

The signal which was rectangular-ized in IV1 becomes the spike-shape signal with the differentiation circuit to compose in C and R2. (The Y point)


The spike signal by the differentiation circuit does the waveform shaping with the inverter IV2.

In the part below the threshold voltage of the signal which is added to the input of IV2, the output of IV2 becomes the H condition. In the interval of the output signal of IV2, it becomes the same as the period of the input analog signal.

R1 and D are the one to protect IV1 when the excessive voltage is gained by the input.

As for the inverter, the input voltage, the input electric current characteristic depend on the kind (the bipolar, LS, HC). The circuit this time is using the LS type.

As well as LS, it didn’t work normally. If adjusting the output impedance(Resistance to the alternating electric current) of the signal generator, the value of R1, I think that it is possible to use the other type. Also, the characteristic of the input of the inverter has an influence on the characteristic of the differentiation circuit, too. Because it is, the pulse duration of the Z point can not be simply computed only at the value of C and R. Actually, attempted to change the value of C but the pulse duration doesn’t change too much.