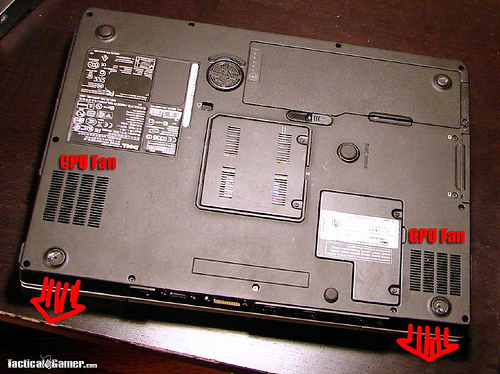 With around 40 USD in parts, I was able to increase my GPU clock speed by almost 50 percent to over 370MHz. What follows is directions on how do create this cooler yourself. If you are having heat problems with your laptop or want to explore overclocking, give it a try!
I use a Dell Inspiron E1705 with a Nvidia GeForce Go 7800 video card. This is a great card, but it generates a LOT of heat in a laptop. For this reason (to reduce heat production) Dell ships the card underclocked with a core clock of 250MHz (down from almost 400MHz in the desktop version of the card). With stock Dell cooling, the card would idle in the ~60°C range and max out at almost 80°C under load. Once I realized this, I decided some auxiliary cooling was in order.


I tried a Bytec laptop cooler, but was quite disappointed. The problem with it, as with most generic laptop coolers, is that it just blows air around the base of the laptop. What I wanted was something to blow cool air into the intakes for each fan. The GPU and CPU fans are located towards the back of the laptop, with the GPU being on the right side and CPU on the left (when right-side-up). The both are centrifugal fans that pull air in from above and below and blow it out the back of the laptop