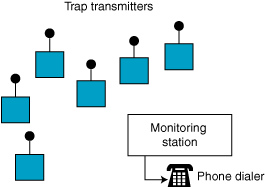 Alberto MC68HC908-based wireless monitoring system is adaptable for use in domestic and industrial settings. The central monitoring station, which consists of a computer-controlled receiver with a relay output and LCD, logs and displays data from up to 20 different sensors.
The block diagrams here show how most of the building blocks have moved from external hardware to internal software modules. The transmitter’s block diagram counts only three blocks outside the chip, as opposed to six internal function blocks supported by the MCU through a combination of software and on-chip peripherals. The parts outside the microcontroller are the sensor mechanism and reed relay, two keys for setting up the trap ID and arming the trap, and a 433-MHz low-power transmitter with a rod antenna. The power comes from a couple of button batteries.

Inside the microcontroller, software modules implement a digital generator for encoding data to be transmitted, a scheduler for cyclic “keep alive” transmissions, storage of user-programmable nonvolatile ID data, a detector for the battery charge state, a manager for a simple mechanism to prevent overlapping transmissions, and a module for administration of the low-power modes.


The monitoring station includes a 433-MHz receiver module and its antenna, a relay stage for driving an external alarm or phone dialer, a 2 × 16 LCD module, and a five-button keyboard. I powered the unit with a wall-cube mains adapter through a linear regulator stage. As for the transmitter, many of the functional blocks are implemented by the MCU that’s in charge of decoding the receiver output and discriminating errors that result from bad reception, interference, or the simultaneous transmission of two or more mousetraps.

The MCU also stores trap information. It registers trap IDs in (internal) nonvolatile memory and programmatically updates trap status records in RAM. The user interface block consists of a trap data browser and a configuration mode for learning trap IDs. A monitor station can handle up to 20 transmitters—although a transmitter ID can range among 128 different IDs—to allow more than one monitor to operate on the same or overlapping areas.