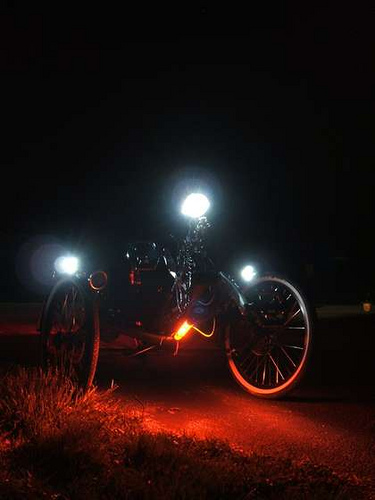 This is a how to for a set of lights for a recumbent trike. The system consists of 3 headlights and 3 taillights, all running off a central power block. It is capable of being run off a variety of batteries as long as there are at least 7.2 volts as well as bike generators 12 volt 6 watt type. Decided to build this system because it is much more powerful than typical bike lights and much cheaper than the highend systems.
First disassemble all the lamps and remove the existing light bulbs and wires.
You’ll want to solder some wires the the LEDs. The white LEDs have solder pads built into the heatsink, but the red LEDs just have straight wires coming out of the acrylic. You may want to test the LEDs after soldering to make sure they’re not heat-damaged.

really isn’t that difficult. You thread the wire through the hole in the back of the lamp, put a dab of epoxy/hot glue/caulk on there, and let it dry. The wires holding the LEDs are plenty enough to keep them in place, and the epoxy waterproofs the entry point of the wires. Let the glue dry with the lamps held in place by a clamp so the glue doesn’t drip down the metal casing. After the glue has fully dried, you can fiddle with bending the wires a bit to make the lights point in the direction you want.


Assemble the power electronics as shown in the schematic diagram. You’ll need to get everything to fit onto a 2″ by 2″ board or it won’t fit in the project box (even then it’s a little tight). Pictured is the almost-completed circuit. It lacks the white LED resistors. The heatsink for the voltage regulator is probably optional, but had some sitting around and thought play it safe.