A motor with two coils 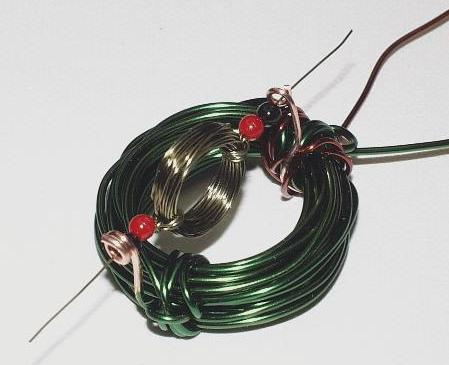 In this section we will construct a motor without any permanent magnets. In place of the magnet, we will use another coil of wire. This coil is called the field coil, and the coil that moves is called the armature coil.
The simplest way to do this would be to replace the permanent magnet with a coil of wire connected to a second battery. But we can save the second battery, and waste less electricity, by arranging the coils as shown in the diagram.

The diagram shows how the electrons flow in the coil. They start where the negative terminal of the battery is connected (marked here with a minus sign). They then flow around and around inside the field coil until they come to the first support loop on the right. From there they flow into the armature coil, going round and round until they come out the other end, and flow into the second support loop on the left. From there they travel back to the positive terminal of the battery.

Because both coils turn on and off together, we never have a condition where one coil is on when the other is off. That would be a waste of electricity.

The photograph above shows the completed motor. I used three different types of wire to more easily show how it goes together.


The heavy green wire is the field coil. It is wound with about 50 turns of wire around a D battery, then removed. The wire ends are wrapped around the coil to keep it tight, just as we did with the armatures of all the other motors.

One end of the field coil wire is stripped of its insulation, and formed into a loop for the first support. The other end goes to the battery.

A brown wire forms the second support. One end is stripped and formed into a loop, and the other end winds around the coil a few times to make a sturdy support, then it goes to the other terminal of the battery.

The armature is made of thin green wire, and is formed in the same way we did for the other motors. A couple of plastic beads keep the armature centered (they are optional).

This motor works fine running from a D cell, and runs faster from a 9 volt battery.