The KD2BD ATV AM Video Modulator 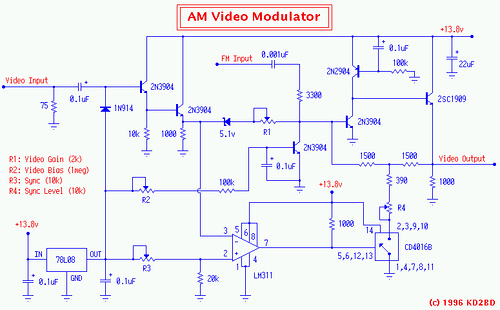 The series output transistor is a VHF power transistor. It has flat response out past 20 MHz, less than 1 percent total harmonic distortion, and does not generate significant levels of IMD. The results show an emission bandwidth greater than 18 MHz at -38dbc levels. use of a Mirage D24 solid state power amplifier after the transceiver served to increase the bandwidth of the transmitted signal even further.
Circuit Description


A 2N3904 in the base circuit sets the `Q’ point of the amplifier. FM subcarrier audio at 4.5 MHz is also injected at this point through a 3300 ohm resistor and a DC blocking capacitor. A high frequency 5-watt RF power transistor (2SC1909) serves as the last stage of the modulator. An NTE-235, NTE-236, or equivalent is suitable in this application.

Clamped video is also fed into an LM311 voltage comparator that serves as a video sync detector. Some builders have used an LM1881 sync separator chip for this stage. Either way, sync pulses detected by this circuit trigger a CD4016B silicon bilateral switch that lowers the negative feedback around the video amplifier and voltage follower at sync time to compensate for high power gain compression in any solid-state linear power amplifiers that may follow the video modulated stages. This method of sync expansion is unique in that it also compensates for audio subcarrier compression at sync time, resulting in a clean output signal with no sync buzz in the transmitted audio.