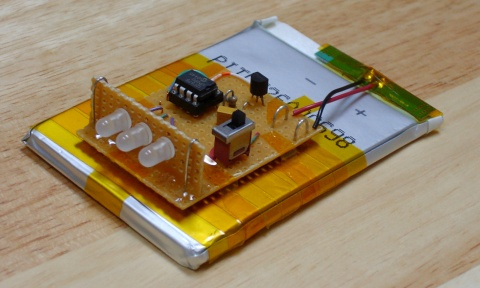 This project is a small, 3 white LED flashlight. It can provide a conservative minimum of 60 hours of usable light.
This 3 LED flashlight uses one Kokam 3270 mAH lithium-polymer rechargeable battery as the power source. The battery provides ~4.2V when fully charged and ~3V when fully discharged. An 8 pin PIC12F675 microcontroller is used to provide current limiting and a battery cutoff. Note that this PIC operates over a ~2.2V to 5.5V range. The “clever” thing about this circuit is that no current limiting resistors are needed. The PIC’s output pins have a built in short circuit current limit of 25mA. Measurements with a 4.2V powered PIC showed that a single output pin driving one white LED will supply [email protected] to the white LED without a resistor. By paralleling 4 pins to drive 3 white LED’s, each LED gets about 17mA – which lights the LED’s brightly enough to almost hurt your eyes if you stare at it. The white LED’s were salvaged from several old, broken solar garden lights, so no data on the rated LED current is available.

The PIC in this application is a very efficient current source. With LED’s off and code running in a tight loop, the PIC consumes less than 1mA of current. When the LED’s are on, current consumption is about 49mA when the battery is fully charged at 4.2V. Since the design does not have a boost regulator, the LED current will decrease and the LED’s will gradually dim as the battery voltage drops from 4.2V to 3V. Even at 3V, the 3 LED’s provide enough light to do tasks in a small room (12 ft square).


When the battery voltage drops to just under 3V, the microcontroller will flash the 3 LED’s for about 1 second and turn them off. This prevents over discharge of the lithium-polymer battery. Instead of a single Li-poly battery, the design will also work with a 3 cell NiCd/NiMH battery pack or 3 alkaline batteries. The 3V cutoff is a bit high for these cases, but close enough for most applications. From the pictures, one can see that an “open frame” design was used, which basically means I was too lazy to put it in a case. 😉 A small board was needed to mount the LED’s horizontally since the leads of the salvaged LED’s were very short. If the leads were longer they can just be bent 90 degrees to get the desired horizontal mount which makes the flashlight even thinner.