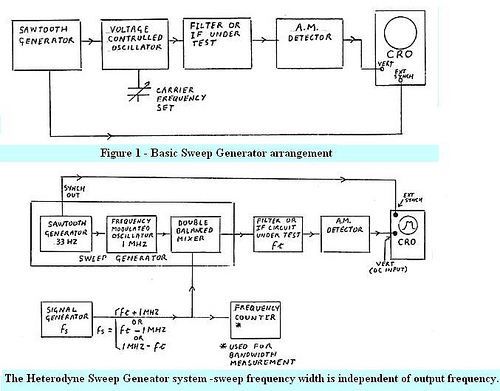 The finalised circuit makes use of a frequency modulated oscillator of fixed centre frequency which is heterodyned with an external variable RF signal source. This assumes that the user has some form of signal generator for general use in the radio shack.
basic system for the sweep generator is shown in figure 1. A low-frequency sawtooth wave is generated from some form of oscillator or waveform generator. The instantaneous voltage of the sawtooth wave controls the frequency of an RF oscillator with its centre frequency set at the centre frequency of the device under test (filter or IF channel etc). Over a single sweep of frequency, RF output voltage from the device, as a function of time, is a plot of the filter response. By rectifying and RF filtering in a simple AM detector, the output is converted to a DC voltage varying as a function of time and this voltage is applied to the vertical input of the CRO. By synchronising the sweep of the CRO with the sawtooth output, the device response is plotted on the CRO screen.

To achieve this for a range of frequencies, it is easiest to sweep a single frequency (say 1MHz) and heterodyne this to the test frequency required. The system developed is shown in the block diagram, figure 2. A 1MHz oscillator is frequency modulated by the output of a sawtooth generator operating at 33 Hz. The modulated output is beat with an external signal generator set to provide the difference frequency centered at the center frequency of the filter or IF circuit under test. The output of circuit under test is fed to a simple AM detector which provides varying DC output level to fed the CRO vertical input. By synchronising the CRO sweep circuit to the 33 Hz sweep generator, a plot of test circuit response is displayed in terms of amplitude verses frequency.

Circuit detail of the heterodyne sweep generator is shown in figure 3. Operation is described as follows:

The XR205 sawtooth generator NI drives a voltage-controlled oscillator N2 operating at a fixed centre frequency of 1MHz. This is a very stable IC package type XR2209 which can operate at 1MHz with its frequency set by external R and C components. Its output at pin 8 is a triangular waveform and this is shaped to a sine wave by LP filter Ll, C10, L2 and C11. The sweep frequency span is controlled by the amplitude of the sawtooth wave and this is set by potentiometer R8.

The 1MHz sweep output is mixed with an external variable signal source (such as a standard signal generator) in a double balanced mixer N3. This balances out the two input signals and delivers two frequencies which are the sum and difference of the input signal frequencies. The well-known MC1496 is used for this function and provides a high output level of mixed signals up to around 20MHz with output falling off as 25MHz is approached. Its low-frequency performance is limited to around 100kHz by the primary inductance of coupling transformer TI, wound on a small ferrite toroidal core. Output level is set by potentiometer R24 coupled via emitter follower stage V1 to provide low output impedance. For satisfactory operation, the signal level from the external signal source needs to be around 0.1 to 0.5 VPP.