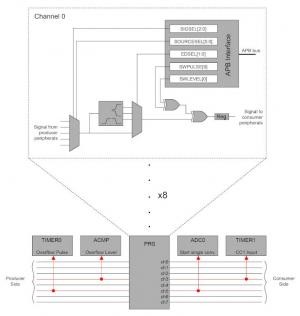 
The PRS contains 8 interconnect channels, and each of these can select between all the output Reflex signals offered by the producers. The consumers can then choose which PRS channel to listen to and perform actions based on the Reflex signals routed through that channel. The Reflex signals can be both pulse signals and level signals. Synchronous PRS pulses are one HFPERCLK cycle long, and can either be sent out by a producer (e.g. ADC conversion complete) or be generated from the edge detector in the PRS channel. Level signals can have an arbitrary waveform, but will be synchronized with the HFPERCLK.