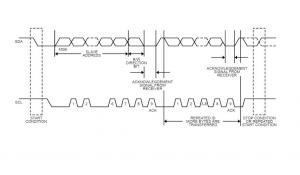 This document defines an enhanced Digital Diagnostic Monitoring Interface (DDMI) available in Finisar SFP and SFP+ optical transceivers. The interface allows real time access to device operating parameters, and it includes a system of alarm and warning flags which alerts the host system when particular operating parameters are outside of a factory set normal operating range. The interface is implemented with reference to SFF-8472, “Digital Diagnostic Monitoring Interface for Optical Transceivers”. As of this writing, the latest version of SFF-8472 is Revision 11.


The history of this interface is that it is an extension of the serial ID interface defined in the GBIC specification, SFF-0053, as well as the SFP MSA, INF-8074. Both specifications define a 256-byte memory map in the EEPROM, which is accessible over a 2-wire serial interface at the 8 bit address 1010000X (A0h). The SFF-8472 added the DDMI and makes use of the 8 bit address 1010001X (A2h), so the originally defined serial ID memory map remains mostly unchanged. The EEPROM portions of the GBIC specification and the SFP Multi Source Agreement are a subset of the SFF-8472 specification. The complete interface is described in Section 3 below.

The operating and diagnostic information is monitored and reported by a microcontroller inside the transceiver, which is accessed via a 2-wire serial bus (also known as “I2C” or “I2C” protocol). The transceiver generates this diagnostic data by digitization of internal analog signals. Calibration and alarm threshold data is written during device manufacture. In addition to generating digital readings of internal analog values, the device generates various status bits, based on a comparison between current values and factory preset limits. Its physical characteristics are defined in Section 4.

These digital diagnostic features are implemented in all Finisar transceivers, except for a couple of part numbers that specifically state that they do not have this functionality.