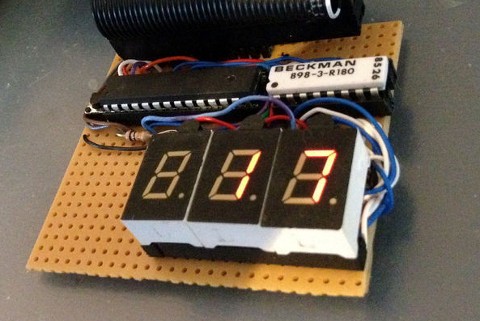 Over at the Bergen hackerspace in Norway the members needed a fast way to determine how many devies were connected to their local area network at the same time, and came up with a neat solution based on a Raspberry Pi and Arduino-compatible circuit. A clear indication of their requirements is displayed using Arduino-controlled 7-segment LED displays.

The Raspberry Pi interrogates the network every ten minutes, determines the number of devices and sends the value to the Arduino side via serial. The value is interpreted by the Arduino and reflected in the LED displays.

This project is not only a useful project but also a good example of maximising the synergy between a Raspberry Pi and Arduino. For details on making your own counted, visit the project’s Instructable page. And for more, we’re on facebook, Google+, and twitter – so follow us for news and product updates as well.

For more complex Raspberry Pi projects that require interaction between an Arduino and a Raspberry Pi for enhanced hardwre control you can save time and space by using our new PiLeven board: 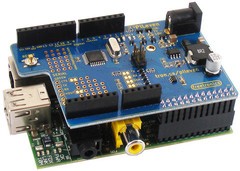 The PiLeven is an Arduino-compatible board based on the Arduino Uno, but with a few changes. Obviously it’s a bit of a strange shape! The PiLeven fits right on top of a Raspberry Pi (either model B or B+) using the Raspberry Pi expansion headers.

The PiLeven also has a high-current switchmode power supply, so you can plug in anything from 7V to 18Vdc using the standard 2.1mm jack. The PiLeven can power the Raspberry Pi, so you don’t need a regulated 5V USB connection anymore.

Serial communications on the PiLeven is linked through to the Raspberry Pi, so your Pi can upload new sketches straight to the PiLeven or send/receive data and commands. We’ve included level shifters so the 3.3V Pi can talk safely to the 5V PiLeven. And you can plug standard Arduino shields right into the PiLeven, giving your Raspberry Pi access to the huge range of shields already available. For more information about the PiLeven, including our tutorials – and to order yours today, visit the PiLeven webpage.