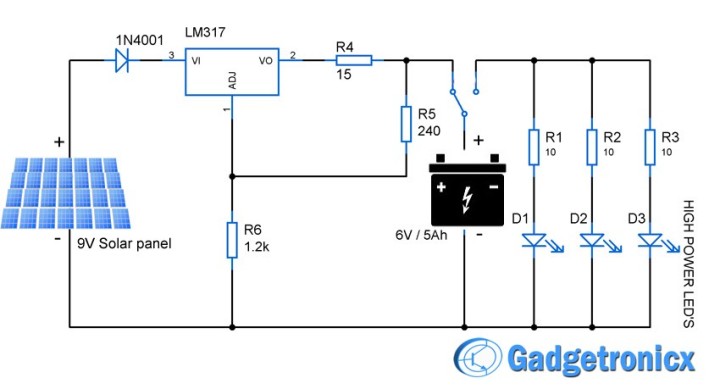 Solar power is one of the extensive renewable energy available in our earth, using solar power efficiently could help us to meet 30% of our energy demands. And that’s the reason we are seeing many solar based products in the market. And today we are about to see the design of a simple solar powered LED light using high power LED which can be used for household purpose instead of primitive lights. 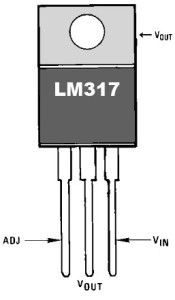 The working of the above circuit starts with the 9V solar panel which converts the incident solar power into the electrical energy. A diode 1N4001 was connected to eliminate the risk of reverse flow of current during night time. The input from the solar power is fed into the LM317 regulator IC. A resistor of R5 and R6 was connected to it to obtain the required output from the IC. Let’s do some math

Applying the R5 and R6 values in the LM317 Vout formula

Now comes the lighting part, here we have chosen three high power white LED’s rated at 3.5 V at 350mA. Resistors R1, R2 and R3 are used to limit the current provided to the LED’s. So the total current consumption of lighting part will be

Thus our battery can power can power up the lights for 4.45 hours before recharging, but it is recommended to leave 25% charge in the battery intact. So the suggested duration of this light usage will be around 3.30 hours.