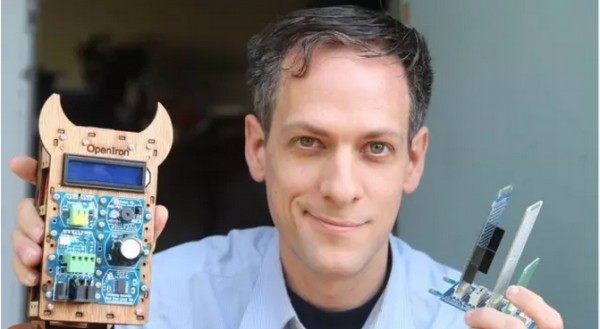 Tully Gehan’s home is a maker’s space. The three-room Bao’an district apartment looks more like a factory than a living space.
There is a wall of blue boxes filled with electronics, dozens of paper cups with screws and bolts, and a laser-cutting machine in the corner.

Gehan, 41, from America, made his own knife rack and a wall-mounted drying rack customized to fit the bowls in his home.
He designs everything on the computer before using a laser cutter to make them.

“This is the beauty of being a maker — I make my own things,” he said.

Gehan, who has been in Shenzhen for five years, is well known in the city’s circle of makers. He used to work for Seeed Studio and co-founded the Chaihuo Maker Space. He’s made several products and is best known for his Doomsday Clock, which is sold Internet retailer Amazon.

The Doomsday clock can be customized, and customers have taken advantage of this. A father made it into a scorekeeper to add and remove points based on if his children were good or bad.
An American used the Doomsday Clock to build a replica of the World War II German encryption device known as the Enigma machine.
The new Enigma machine was popular and sold for US$1,000 a piece, leading the American to quit his job and become a fulltime maker.


Gehan graduated from college with a degree in Mechanical Engineering in 1998, but for the past decade he has been working for electronic companies, first in the U.S., then in Hong Kong, Beijing and Taiwan before coming to Shenzhen five years ago.

Becoming a maker has always been his dream. In 2009, when Arduino — an open-source software and hardware platform — became popular, he quit his job and learned how to make electronics.

“I learned everything about making from Internet,” Tully said about the year he spent studying.
Making is fun, but often not profitable. Gehan sells about two Doomsday Clocks each week on Amazon. “Enough to buy several cups of Starbuck coffee,” Gehan said with a laugh.

With more than 15 years of experience in electronics, Gehan’s fulltime job is helping Americans manufacture electronic products in China.

“They find me at the maker fairs. Demand (for manufacturers) is big,” he said. He also supports the maker community through involvement with a hardware accelerator called Higgs Hub.

Gehan’s dream is to become a full-time maker. For him, making is not about designing a consumer product, it’s about turning an interesting idea into something real.