Using a Transmitter and Receiver to Create a Transceiver 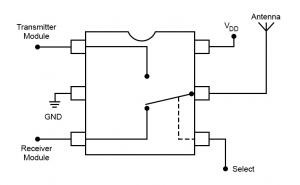 One application for Linx RF modules is to make a transceiver out of the separate transmitter and receiver modules. This allows for the bi-directional transfer of information while using low-cost and easily implemented Linx RF modules. The only additional RF component required is an antenna switch.

The antenna switch is an Integrated Circuit (IC) that will connect the antenna to either the transmitter or the receiver based on the logic state of one or two control lines. The switch serves two primary purposes. First, it maintains a 50-ohm match between the antenna and the modules. If you were to connect both modules directly to the antenna, then each part would see a 25-ohm impedance. This mismatch would result in losses that would degrade the range and performance of the system.


Second, it prevents the full output power of the transmitter from being placed directly onto the sensitive front end of the receiver. While this probably would not damage the receiver, it would saturate the front end and take several tens of milliseconds for the receiver’s sensitivity to return to the point where it can see a signal.