Dtto: a modular 3D printed robot that can build itself 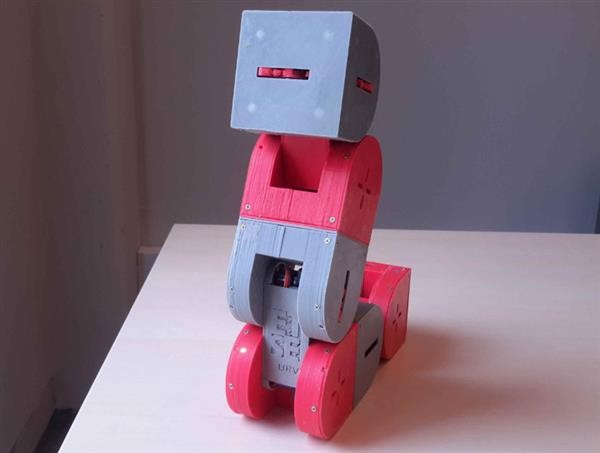 Dtto is a 3D printed robot designed to be versatile, flexible, and self-reconfigurable, and which could potentially be used to perform rescue operations. The project, which is currently intended for research and education purposes, was inspired by the Japanese MTRAN III project and, curiously, by martial arts legend Bruce Lee:

The chain-like robot is able to move in different ways. When several modules are joined together, Dtto can crawl like a snake, which—despite a limited speed—overcomes some of the challenges associated with wheeled and legged robots. But the 3D printed bot can also be assembled to have legs, and can even connect its “head” and “tail” modules and roll in a somersault motion—something we have never seen a snake do! As well as giving Dtto a range of movement possibilities, Alberto also plans to supply future versions of ditto with extra functions, such as a camera, ultra-sound sensor, gyroscope, accelerometer, and magnetometer.

Dtto was designed entirely on FreeCad, 3D printed on open-source 3D printers, and is licensed under the CC BY-SA 4.0 license. All files are available on GitHub. Alberto hopes that a scaled-up version of the robot could someday be used to perform rescue operations and explore unknown environments—including space.

Dtto specifications and components (per module):