The Perf+ is two-sided perfboard with a twist. Each column of individual holes has a bus running alongside. Each hole can selectively connect to its adjacent bus via a solder bridge. These bus traces are independent of each other and run vertically on the side shown, and horizontally on the back.

It’s an innovative idea, but is it a reasonable replacement for perfboard or busboard? I found out by using it to assemble a simple prototype.

The prototype Laziness Defender was assembled by diving straight in; in other words, tested on a breadboard then hacked together from the schematic like a junk-box project as though I were using normal perfboard or busboard to quickly get something working. I attempted to use the Perf+ for all the signal routing, which I did with the exception of two capacitors soldered directly to the LM556 pins because by then, I would have had to do some pretty convoluted connections to make them work and I was already running into problems keeping track of things on the Perf+ board.


There is an open-source tool called Perfy which allows visualizing and laying out connections to generate plans of where to solder, bridge, and cut on a Perf+ board, but I didn’t find it very useful for assembling a project in an ad-hoc manner.

The Perf+ may have a place as an alternative to a PCB for small quantities of finished units that are not expected to need any changes or rework. The result is wire-free and clean-looking, which may be worth the added effort of planning the layout and connections with a tool like Perfy.

The Perf+ can also be used as a straightforward perfboard alternative with the added bonus of making simple bus connections very easily. Knowing when to stay away from complex routing on Perf+ in favor of the occasional jumper wire (or point-to-point soldering direct to leads) absolutely makes things easier to troubleshoot or modify later. 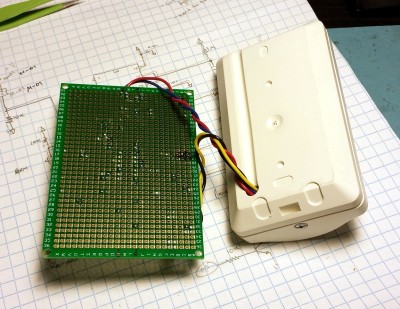