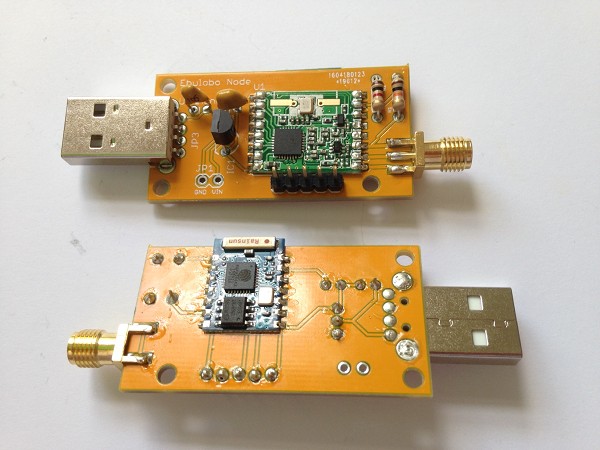 The aim was to use ESP8266 and reflash the onboard processor with the Arduino development environment to allow easy porting of the current UKHASnet code. The ESP would act as the main microprocessor and control the RFM69 over SPI. Any packets received by the RFM69 would then be uploaded by the ESP via wifi to the main servers on the internet acting as a self contained gateway.

To make it easy to power I added a USB male header to the board which when plugged into a usb socket (such as on the backs of wifi routers) would provide 5v. This would then be regulated by the MCP1700 down to 3.3v which would then supply the ESP8266 and RFM69. This is also a 2 pin header which breaks out Vin and GND in case an alternative source is used.


Programming the ESP8266 is via serial and so GND, Tx and Rx are broken out to another header, to reflash the ESP8266 its necessary to pull GPIO0 to ground on boot and so GPIO0 is also included in the header to make it easy to add a jumper to set this up.

The ESP8266 also requires GPIO15 and GPIO2 to have pullup/pulldown resistors and so through hole packages were used. The whole board is either through hole or easy circuit board soldering and can be assembled in about 5 minutes.