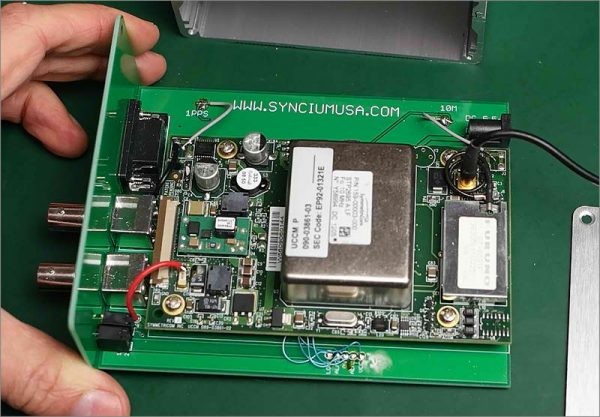 Andy Brown did a teardown of a GPS Disciplined Oscillator:

The design did actually surprise me. I was expecting to see an OCXO pulled from something else together with a modern GPS unit and an MCU to co-ordinate the synchronisation all mounted on a custom PCB. What we’ve actually got is an entire Symmetricom GPSDO pulled from some other device and mounted on to a trivial minimal PCB that does nothing more than break out connections to the front panel.

One of the basic requirements for building a frequency counter is the ability to calibrate it and to do that you need to have a reference clock source that you can rely on to be more accurate than the device you’re trying to calibrate. For my purposes that meant either a rubidium clock or a GPS Disciplined Oscillator (GPSDO).


Rubidium clocks are very precise, having an Allan Deviation (adev) of 10-12 but they do require periodic calibration which makes it difficult to trust the used devices that you can get on ebay.

By contrast, a GPSDO is a hybrid device that relies on a relatively cheap oscillator that is very accurate in the short term and can be gently nudged (disciplined) into line in the long term by a time signal received from GPS satellites. These devices never need calibrating but they do have a finite lifespan which is something I’ll explain when we get into the detail.