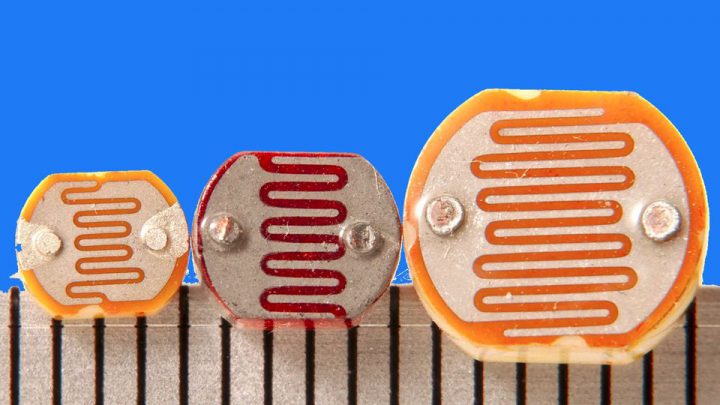 Such a resistor is called the photo-resistor, and in this article we shall discuss about some aspects of the same.

What is a Photoresistor?

Photoresistor is the combination of words “photon” (meaning light particles) and “resistor”. True to its name, a photo-resistor is a device or we can say a resistor dependent on the light intensity. For this reason, they are also known as light dependent a.k.a. LDRs.

So to define a photo-resistor in a single line we can write it as:

From our basic knowledge about the relationship between resistivity (ability to resist the flow of electrons) and conductivity (ability to allow the flow of electrons), we know that both are polar opposites of each other. Thus when we say that the resistance decreases when intensity of light increases, it simply implies that the conductance increases with increase in intensity of light falling on the photo-resistor or the LDR, owing to a property called photo-conductivity of the material.

Hence these Photoresistors are also known as photoconductive cells or just photocell.

The idea of Photoresistor developed when photoconductivity in Selenium was discovered by Willoughby Smith in 1873. Many variants of the photoconductive devices were then made.

In order to represent a Photoresistor in a circuit diagram, the symbol chosen was that would indicate it to be a light dependent device along with the fact that it is a resistor.

Working principle of a Photoresistor

In order to understand the working principle of a Photoresistor, let’s brush up a little about the valence electrons and the free electrons.

As we know valence electrons are those found in the outermost shell of an atom. Hence, these are loosely attached to the nucleus of the atom. This means that only some small amount of energy is needed to pull it out from the outer orbit.

This very basic principle is used in the Photoresistor. The light that falls on a photoconductive material is absorbed by it which in turn makes lots of free electrons from the valence electrons.

The figure below shows a pictorial representation of the same:

Thus, as the light intensity increases, the number of free electrons increases. This means the photoconductivity increases that imply a decrease in photo resistivity of the material.

A Photoresistor is generally made of a semiconductor material that is used as resistive element without any PN junction. This essentially makes Photoresistor a passive device. The two types of Photoresistors are:


Now that we have covered the mechanism and the types, you must have got an idea how a Photoresistor works. However, a question may arise: How to connect Photoresistor in simple circuit?

Let’s see an example below that has a very basic Photoresistor circuit.

Can you guess what happens?

What does it mean? Yes, it means the opposition to the flow of current is high or we can say its resistance is very high.

Will the LED bulb get lit? Obviously NO, since no current is flowing through the circuit.
CASE 2: Light falls on the Photoresistor

This is an easy one for you to guess now right?

So what does this imply about the resistance of the Photoresistor?

Yes you guessed it right; this implies that the resistance has decreased significantly allowing the flow of current in the circuit.

Thus the LED in this case would light up.

Next section lets you understand the common uses and applications of a Photoresistor.

Automatic Street Lights: One of the prominent uses of Photoresistor that we experience in daily life is in the circuits of automatic street lights, as already hinted in the introductory paragraph. Here they are so used in a circuit that the street lights turn on as it starts getting dark and turns off in the morning.

Some of the Photoresistors are used in some of the consumer items like light meters in camera, light sensors like in robotic projects, clock radios etc.

They are also used to control the reduction in gain of dynamic compressors.

They are also considered as a good infra-red detector and hence find application in infrared astronomy.

With this we come to the conclusion of the article, let’s rewind what we learnt in this short tutorial.

Photoresistor In a Nutshell

Most common application in the circuits of automatic street lights, and other consumer items like light meter, light sensor etc.