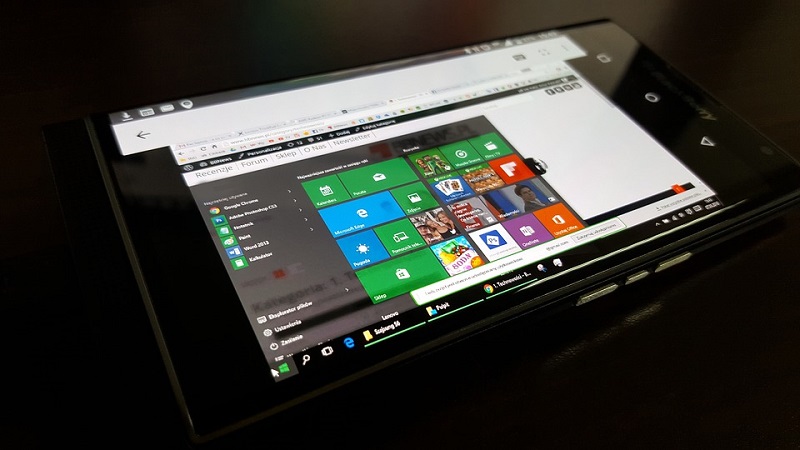 [ Windows 10 for Android and other Windows versions guide 2019, from Eltechs Blog ]

Windows and Android are absolutely different operating systems, working on absolutely different types of processors (x86 for Windows and ARM for Android) and having so many differences that one hardly imagine Android and Windows on the same device. Though there’s a way to find Windows 10 for Android. As well as Windows 8, Windows 7 and Windows XP on Android working alongside. Read the article till the end to find out all the nuts and bolts about Windows on Android in our Windows 10 for Android ultimate guide 2019.

Spoiler: if you’re surfing Google in search for the information about that – stop it. Here you’ll get everything!

Windows 10 on Android: the mirroring

First, that is ever found while searching for Windows on Android is the Microsoft announcing and describing their Windows 10 mirroring Android. What’s that? This is an opportunity for you to give your Windows desktop PC remote access to your Android’s document and photos. This is done via an Android app called Your Phone Companion by Microsoft. It’s free and available for download on Google Play, featuring 5+ million installs and 4.2 average quality review rating.

According to Devindra Hardawar from Endgadget, the Companion app has got the following pros and cons.

So, as you can notice, the “Your Phone Companion” application allows live streaming of your Android screen on the desktop and vice versa. While that you can operate some native Android apps on Windows (or Windows apps on Android) but this list is quite limited.

In this article, we’d like to look at the indifferent intentions, like those which include installing Windows directly on Android device (not the apart situation, when Android is installed on Windows). There may be different reasons for that, including just the self-education and developing some operating systems administration skills, software development skills or other technical and software engineering goals.

Obviously, Windows 10 is to “heavy” for average Android device to handle. That’s probably why very few users try “playing around” with Windows 10. Though there are different ways to install Windows 10 on Android which you are going to learn below on the examples of installation the other Windows versions on Android. Besides Windows OS, there’s a possibility of running particular Windows Applications on Android natively, which means with almost native speed, directly on Android devices without any streaming. If your purposes can be described with this, jump to the subject right now.