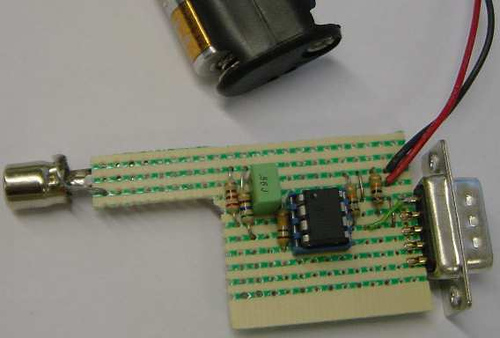 The prototype has power consumption of 0.5 mA running with the video cable disconnected from the TV set, and 4.5 mA when the cable is connected. So most of the power goes to drive the 75 ohm video line.
These measurements were made with two AA cells giving about 2.9 V for the circuit. The paddles of course also consume some power.

This project is based on ideas from Rickard’s electronic projects page and David B. Thomas VCR Pong. However, I have developed the simplicity even further, eliminating most of the external components. Using microcontrollers with internal 4MHz clock generator there is no need for the xtal. The 12f675 part also operates on wide voltage range, and the regulator can be removed.

At the moment the game software is still under design. Only a simple PAL 625 line test image video output program exists. It compiles with gpasm / gplink