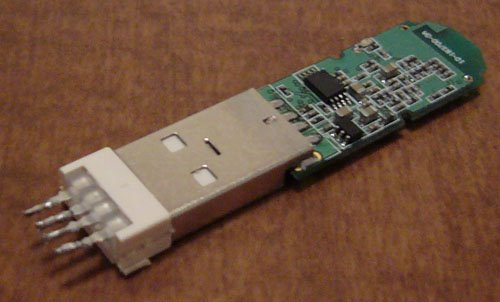 This one really only uses a Bluetooth dongle plus some cables. No hub or any other electronics so it’s actually a no-brainer to get this one working. That is as long as you have the space within the laptop to hide the dongle away.
I just bought a used Dell CPx laptop. It’s not that fast but it gets the job done. I have a Bluetooth cell phone that I wanted to use as a wireless modem when I can’t find a Wi-Fi hotspot. The CPx only has one USB port on the back but it shows two of them in the device manager. Inspired by TnkGrl I decided to try and tap the unused USB port and add a Bluetooth module internally. This would eliminate having the annoying dongle on the back of the laptop and also leave the USB port available for other uses.

Since the CPx is a fairly big laptop there is a little bit of room to play around with inside and I decided to try and keep the Bluetooth dongle as stock as I possibly could. TnkGrl had to remove the USB connector on her module for space reasons but I would rather leave it unmodified if possible. I had a USB-PS2 adapter that I wasn’t using so I ripped it apart and got the centre portion of the USB connector. This together with unsnapping the case of the Bluetooth dongle led to a very thin package although you can see the USB connector effectively doubles its length. If I didn’t have as much space to play with removing the connector would mean you could fit this just about anywhere.


I found a nice empty spot right under the palm rest and between the battery and CD drive. I had to cut a little notch out so the wires could slip through but its not visible from the outside.

Now that I had a good mounting spot for the Bluetooth module I had to figure out how to hook it up. I followed the traces from the existing USB connector and they seemed to go to an Intel chip that had PCIset written on it. It also had FW82371MB across the top and after a little bit of searching I came across the datasheet for it. It indeed did have two USB port built in. By examining the datasheet I found the USB pins that I needed. The chip has a XY coordinate system for its pins. The pins in red are what I needed to tap into. Actually finding the pins was nice but pretty much useless, there’s no way I could get next to the chip to attach any wires, all the connections were hidden. By following the traces from the original USB connector I noticed that they went to the docking station connector first then to the chipset. This makes sense because normally with the USB in the back you have to remove any devices before you can dock the laptop. I know the docking station has two USB port instead of one so I figured they just added the connector on the docking station to the existing USB hub. Why they didn’t add two ports on the back of the laptop I’ll never know but I wouldn’t be surprised if it was simply to help the sales of the docking station.