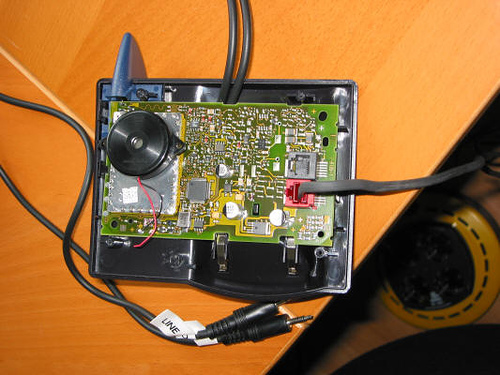 You have a computer, your friend has a computer, you both have a broadband connection, and you make use of Skype or like the voice chat in MSN or something like this – And – you’re sick and tired to sit by the computer all the time when you talk. And you might even sit with one of these ridiculous headset (hmm, yes I also have one) on your head just because the echo cancellation feature isn’t that great in reality.

A year ago or so I tried to connect a professional headset from Plantronics to my computer just because they’re so damn good and fit perfect. Well, I did get it to work after having a couple of boxes in-between the computer and the headset, but I was still tied to the computer. Now, I’ve seen some other devices around that basically give you an handset to connect to the USB port and then you can use that. Well, you’re still tied to the computer huh? No fun. Then I read in a local magazine (Veronica magazine here in the Netherlands) about Siemens making a DECT USB adapter so that you can connect your DECT phone to the computer – and I though Wow! that’s what I need. Well, €119 for another toy that I’ll use like not that often? I don’t think so. But hey, I have an old Siemens Gigaset 3010 phone laying around that my children play with (’cause the 2 key was a bit broken), I wonder if I can use that one? So I did.

Not that simple at first, but very much simpler at the end. I started with opening the base station (Duh!) to see what chipsets were in it. I was hoping for like an RF part a couple of lines on the circuit board and then a telephone circuit. Tji fick jag! No of course not. As any standard electronics they make use of a whole bunch of circuits, so I started looking up on the internet what they did and again – nothing to be found. Then I decided to make use of the highly scientific method Trial and Error and hoping for a bit of good luck.


By having the phone off hook I carefully inserted my little screwdriver here and there until a heard a click in the handset. And when I found that click I injected a signal from my MP3 player – and it worked! Then reverse, by blowing in the handsets microphone I used the regular headphone for my MP3 player to see where I could ‘hear’ the phone. By grounding on wire and using the other as a probe I quickly found the spot next to the first spot.

Note the red (sound to the phone) and green (sound from the phone) circles on the board. Then taking an 3.5mm to 3.5mm plug cut in half connecting L+R and then attaching it or respective place (for in and out) making use of the downside of the RF part as ground plane I ended up with this. As you can see I’ve used an unshielded cable, but it works perfect anyway!