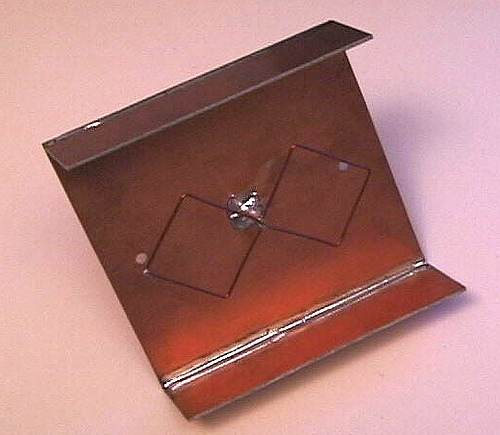 The Primestar dishes are high gain, low cost, parabolic reflectors with an offset feed. They have superior sidelobe performance when compared with a wire grid antenna, reducing the chance that somebody off of the axis of your link will be able to interefere with it. But they are hard to feed because the f/d ratio varies from about 0.5 in the vertical axis to 0.8 on the horizontal axis.

Additionally the spacing between the feed ‘slot’ and the feed mounting bar is small (about 55 mm), which is less than a half wavelength at 2.4GHz
Failure to couple efficiently to the dish’s wide aperture, or to minimize radiation into the mounting bar, will result in poor gain and/or significant sidelobes.

Construction of the Biquad

I used Printed Circuit board scraps for the 110 x 110 mm reflector, but it will be just as effective if made out of sheet brass or copper. Aluminum can be used if soldering of the rigid coax is not required at the feed point.

The reflector’s ‘lips’ are 30 mm high, and serve to reduce coupling into the mounting bar. Note that they are only required along the main edge axis of the reflector. The lips cut down radiation from the rear lobes of the biquad by about 6 dB

The best SWR is obtained when the biquad loop is about 15mm above the ground plane, and the SWR may be adjusted by varying this distance.


If you are making a stand-alone antenna, rather than a feed, you will get better gain from a reflector 123 x 123 mm

The rigid 0.141 diameter coax is soldered to the groundplane to provide physical support for the structure. If the biquad element is constructed carefully there will be no component of radiation along the axis of the coax, no current is induced into the coax outer conductor, and a balun is not needed.

To make the element take a piece of 1.2mm bare or enamelled copper wire exactly 244 mm long. Bend it in half, and then make the bends at the halfway point on each leg (where the solder joints will be). Then bend the 4 remaining right angles so that the element sides are rectangular, and there is about a 1.5mm gap for soldering to the feed. The widths of the two quad elements will be approximately 30.5mm, from wire center to wire center.

You may use standard coax cable to connect at this point, if you do not have rigid cable available, but you will have to figure out how to support the loop physically.

The best SWR is obtained when the loop is about 15 mm above the ground plane and when the reflector is mounted about 10mm in front of the Primestar’s feed bracket.