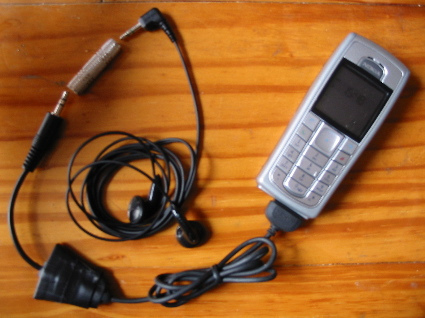 When Nokia announced their music player capable phones they neglected to mention the lack of support for external headphones. This mod includes an analog volume dial integrated into the push to talk unit. The HDS-3 cable ships with the 6230 and other Nokia phones capable of stereo playback.
Before starting, a quick rundown of some other Nokia models of pop port headphones and adapters include:

Nokia HS-3 “Nokia Stereo Fashion Headset” white or black, smaller push to talk unit than the HDS-3, headphones are still of an inferior audio quality
Nokia HS-8 “Nokia Activity Headset” ugly and bad audio quality headphones
Nokia HS-6 “Display Headset” lcd display and controls for audio and calls, but yet again no port to plug in your own headphones
Nokia HS-23 “Nokia Stereo Headset” includes volume control, lesser quality headphones
Nokia AD-15 “Nokia Audio Adapter” allows you to plug in your own headphones, unfortunately this is achieved with a big box on the end of the cable, there is no mic, and as far as we can tell no button to switch tracks.

Even headset models that are not available on the market yet don’t allow for the consumer to plug in their own headphones. Why Nokia? Why! For a few weeks we assumed that the audio quality coming out of our 6230 was just as dismal as the headphones in the HDS-3 headset led us to believe. The astonishing part is that no, the audio quality of the 6230 is comparable to most mp3 players on the market once you manufacture your own adapter cable.


The second mistake by Nokia is the misinformation as to how much memory can be recognized on the mmc cards. The manual for the 6230 states the mmc card can be up to 128 mb. In reality the phone can recognize mmc cards up to 1 gig. To see if your phone’s firmware is up to date enough to work with that much memory, in the 6230 type: *#0000#. On the screen you should see something similar to:

The important information in this is of course the firmware version on the second line, in this case 5.24. If your phone is not up to date you can have the firmware flashed at most cell phone provider stores. Note that firmware upgrades will wipe the memory of the phone, so be sure to save important info before upgrading. The firmware of the 6230 starting with version 4.44 should correctly recognize 1 gig of memory on the mmc, but may not search the subdirectories on the card for music files to include in the playlist. Before loading audio on the mmc card, we suggest you format it in a card reader on your computer rather than on the phone. Format the card, re-name the card, then fill that 1 gig of happiness with a playlist of mp3/aac and/or mp4 if you have a Nokia model that supports it.