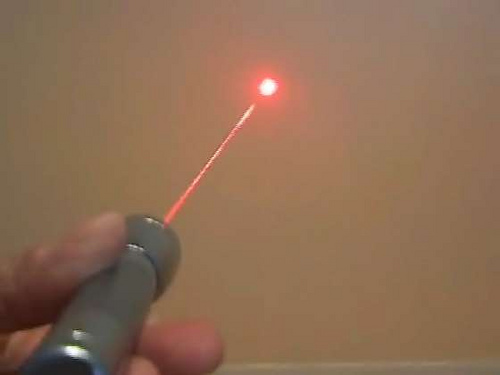 Turn a MiniMag flashlight into a powerful DVD laser pointer.This 245mw laser is powerful and fits real cozy in a MiniMag.
After removing all of the screws from the DVD burner, remove the cover and the DVD drawer. This will expose the laser carriage assembly.
Remove all screws and do whatever it takes to free up the rails so the laser assembly slides off. Disconnect or cut and cabling and flat connectors.
Once you have the assembly off of the burner it’s time to start disassembling it by removing all the screws you see.
Get the new DVD Laser Diode.
Remove the label from the AixiZ housing and unscrew the housing leaving a top and bottom portion of the housing. Inside the top housing is the original (5mw) laser diode that has to be removed.
Use a little bit of Arctic Silver Thermal grease and slowly installed the new DVD diode in the AixiZ housing. Using a pair of pliers, slowly squeezed the edges of the diode down into the housing until it was flush.
After soldering two leads to the positive and negative diode connectors, it’s time to install it in the MiniMag. After disassembling the MiniMag (remove the top, the reflector, lens and bulb) you will need to enlarge the MiniMag reflector using a reaming tool, round metal file or drill or a combination of all three.
Be sure to remove the batteries from the MiniMag and after checking polarity, slip your new DVD Laser housing down into the top of the MiniMag where the bulb would go. Screw the top of the MiniMag on and slip the reflector over the Laser housing.