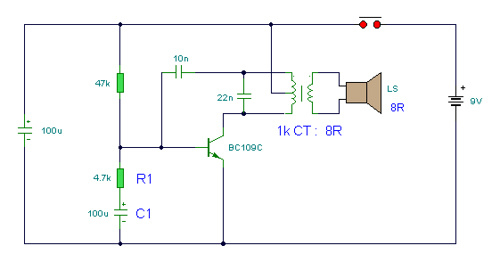 The circuit aims to imitate a chirping canary made of electronic circuit components such as the Hartley Oscillator.Designing this circuit does not require much complicated connections. It can be powered by a 9 V battery source while the modification and adjustment being made to the circuit output may be controlled by the tank circuit utilizing the benefits of the Hartley oscillator.
This circuit is a modified hartley oscillator with a couple of extra components included. The transformer is a small audio transformer, type LT700. The primary is center tapped with an impedance of 1Kohms at 1KHz . The secondary has an impedance of 8 ohms. The inclusion of R1 and C1 give this oscillator its characteristic “chirp”. As the 100u capacitor charges via the 4.7K resistor, R1 the bias for the transistor is cut off. This causes the oscillation to stop, the capacitor discharges through the base emitter circuit of the transistor and oscillations start again. Altering these components alters the frequency of the chirp. The chirp is also voltage dependent. When the push button switch is operated the 100u capacitor is charged. When its released, the oscillation decays and the chirp becomes faster.


An electronic version of a chirping canary. May be used as an alarm, a sound effects generator or perhaps a replacement doorbell.