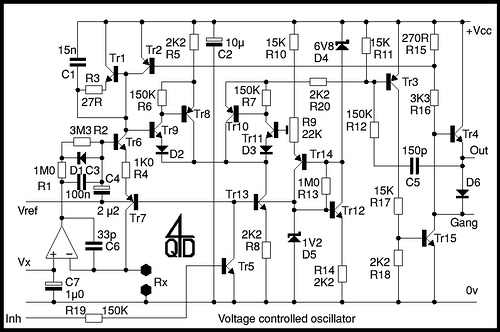 This is a circuit which has been in the past a production item, so is tried and tested. 4QD could therefore produce them, provided the quantity is reasonable. Since artwork has been prepared once, we could produce a quantity as small as 25-50.
Current Sink

Tr6, Tr7 and the IC form a precision current sink. The IC we used was a 3140 but any op-amp could be used, provided it is on the ‘single supply’ variety, i.e. one that will work with its input terminals at the battery -ve line. The ‘output’ current flows into Tr6’s collector, through Tr6 and Tr7 and so Rx, which is connected external to the circuit board, so that it can be varied – e.g. to switch ranges. The voltage developed across Rx is compared in the op-amp with the input voltage Vx. Vx is obtained by a potential divider from the Vref line. So the current into Tr6 is very accurately Vx/Rx.

For stability, Vref is derived from D5 which is a 1v2 precision voltage reference. These have high stability and low drift. Of course, if you don’t require these features, use, for instance, an ordinary LED to develop about 2v. The exact voltage is not important!

Tr6 and Tr7 form a complementary long-tailed pair (which I’ve described elsewhere) used as an output stage to the current sink. The basic circuit of this is described elsewhere (circuit 7) , here it incorporates a resistor (R4) between the emitters and a network between the two bases. This is to cause the frequency to change slowly if the current is switched: to operate a stepper motor at full speed the frequency has to be ‘wound up’ at a slow enough rate to allow the motor to accelerate. R4 and this network accomplishes this ramping.

The oscillator itself is a ‘relaxation oscillator’. In this type of oscillator a capacitor is charged at a defined rate then, when it reaches a set threshold, it is quickly discharged to a lower threshold when the discharge circuit switches off and the capacitor again charges.

Here the charging capacitor is C1. It is charged by the current sink described above and discharged by Tr1/Tr2.


Since the top end of the capacitor is connected to +Vcc, charging it causes its lower end to fall towards 0v. The low end of this charge ramp is set up by the preset on the base of Tr11. Tr9, Tr8, Tr10 and Tr11 are a standard long-tailed pair with high gain and Tr13 as a constant current tail. This long tailed ‘complimentary darlington’ pair has extremely linear characteristics and will work at extremely low base currents, so even at very low frequencies will behave predictably without pulling the expected frequency much.

The preset, R9, is not very necessary but, on a production run, enabled all machines to be calibrated accurately, without using precision components, adjusting R9 simply alters the frequency.

Tr12, Tr14 with D4 and D5 form a highly accurate reference supply. D4 with R9 and R10 in series turn Tr14 into a constant current source to bias D5. D5 with R14 establish a constant current to bias D4. This ring gives two stable references but has one small disadvantage: at power up, it won’t start itself, so R13 is included to add a bit of leakage to start the circuit. D5 is also used as a base bias for Tr13, the tail for the long tailed pair and also to simply Vref, the voltage source for the input.

The output stage is a monostable pulse generator built around a totempole: Tr15 is the base of the totempole and Tr4 is the top. C5 with R12 determine the on time. While the output stage is on (output low), Tr2 is turned on, discharging C1.

This monostable is required because the stepper driver for which this was used had a defined minimum acceptable pulse width. However, since this pulse width is fixed and the time between pulses is variable, the current to frequency graph naturally becomes non linear as the pulse time starts to become significant compared with the ramp time.