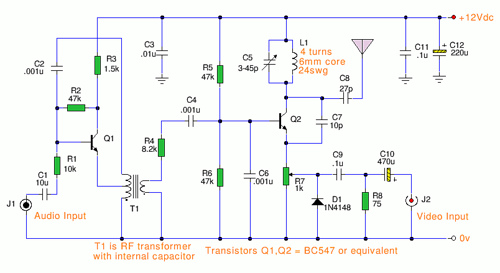 The circuit was designed to illustrate the process of a TV transmitter as it functions using PAL video modulation and operates under VHF band.
Circuit Explanation

This transmitter communicates in the frequency range between VHF and VLF on the TV channel. The variable capacitor C5 performs the tuning of the circuit to a modulated sound signal range of 5.5 MHz to 6 MHz. The circuit utilizes frequency modulation for sound signal for high fidelity broadcasts of music and speech, which may also be compatible with system