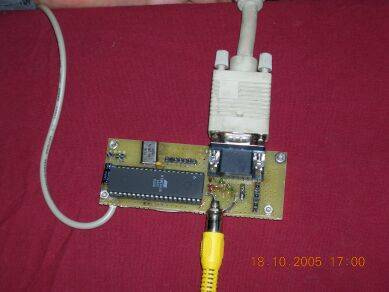 This project describes how to create video or vga signal using a 8-bit AVR microcontroller.
With commonly available microcontrollers like the Mega8, Mega16 and similar, and with a minimum of external components I wanted a design that would be capable of displaying at least 15×15 characters on a VGA monitor using standard VGA frequencies. The data itself is to be received by the microcontroller via its USART port. All using a 16 Mhz clock for the AVR.

Initial calculations showed that the the AVR 8-bit microcontroller from ATMEL, with its 16Mhz clock speed providing approximately 16 MIPS was a good candidate for further research. Also note that newer AVRs such as the Mega48, Mega88 and Mega168 will officially support clock rates upto 20 Mhz. Therefore I concluded that with a clock of 16 Mhz I could achieve something in the order of 8 Mhz speed of data being transferred out of a port. I also chose the AVR as I had already built up quite a body of experience with it and so I began work of the project.

After approximately two to three months of research, I present you the fruits of my labour!

Characteristics of the project: